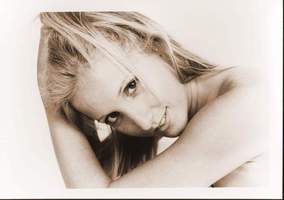 As the youngest daughter of a Ballet Dancer, Evelyn started her Dance training at the young age of 2 and a half. Completing all grade exams of the RAD© as well as Elementary and Intermediate at her Mothers Dance School. At the age of 15 she was accepted at the Elmhurst Ballet School in the UK, where she spent 2 Years in full time training Majoring in Ballet and Theatre dance. After another 2 Years of full time training at the London Studio Centre she Graduated with a Diploma in Jazz Theatre Dance, and set out into the World. After performing in a verity of Dance Productions from Cabaret to Musical Theatre in a number of countries from South Africa to Australia and through Europe, she found herself living in Scotland looking for a new challenge. By Chance she found her first Aerial Coach and instantly fell in love with the art form. A few months later she furthered her knowledge of Aerial Tissue at the first Aerial Festival in France with Fred Deb and Jacques Bertrand, the Teachers who over the years have deeply influenced her Style.

While furthering her Aerial Skills she also completed her RAD© Major Exams by passing both Advanced One and Two with Merit. She was rewarded the Austrian "Paritätische Prüfung" in Classical Ballet, as well as the ARAD tittle.

Having recently completed the Teacher Training Program through the Ecole National de Cirque in Montreal, Evelyn is now not only performing for various Shows and Event but also teaching Courses, Private lessons and Workshops Internationally. Specialising in Static Aerial Apparatuses she teaches, Silks, Trapeze, Dance Trapeze, Lyra, Hammock and Aerial Net as well as doubles on both Silks and Trapeze.